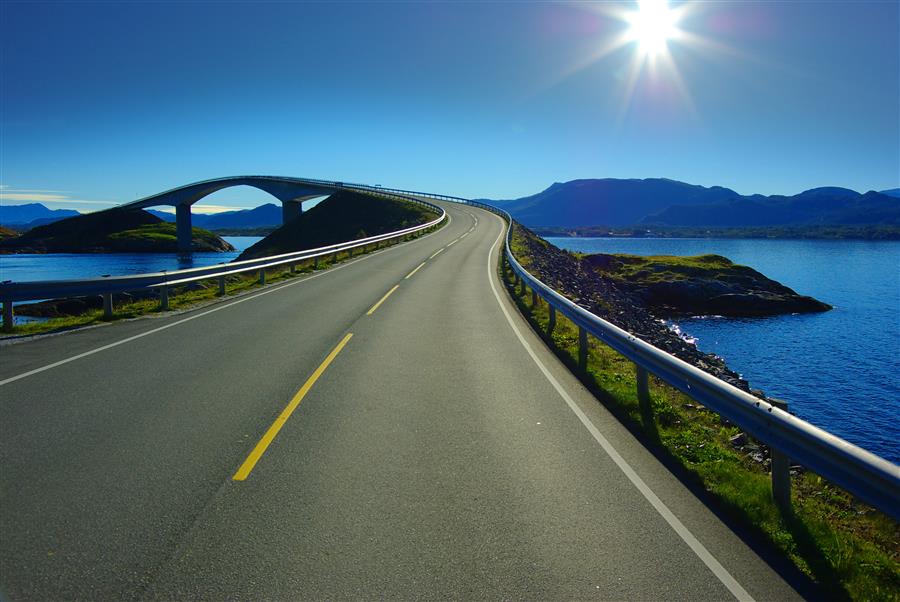 Still booming after all these years

Although the Norwegian construction market has been on a growth path for 25 years, the next boom years still lie ahead.

The total construction output reached 47 billion Euro in 2018 and is expected to break the 50 billion mark soon. This level will give the highest per capita volume in Europe ever noticed.

The Norwegian economy has been on a remarkable journey for the past 25 years. The upswing started in 1992 with recovery after a collapsing development from 1988. The construction industry, of course, took their part of the difficult years that ended in 1992. Thereafter the overall economy has nearly doubled its size with a real term growth of 78 % – a fantastic development of course.  In the same period, the construction sector grew even more and ended up with a 132 % larger volume (in real terms) in 2018 compared to 1992. 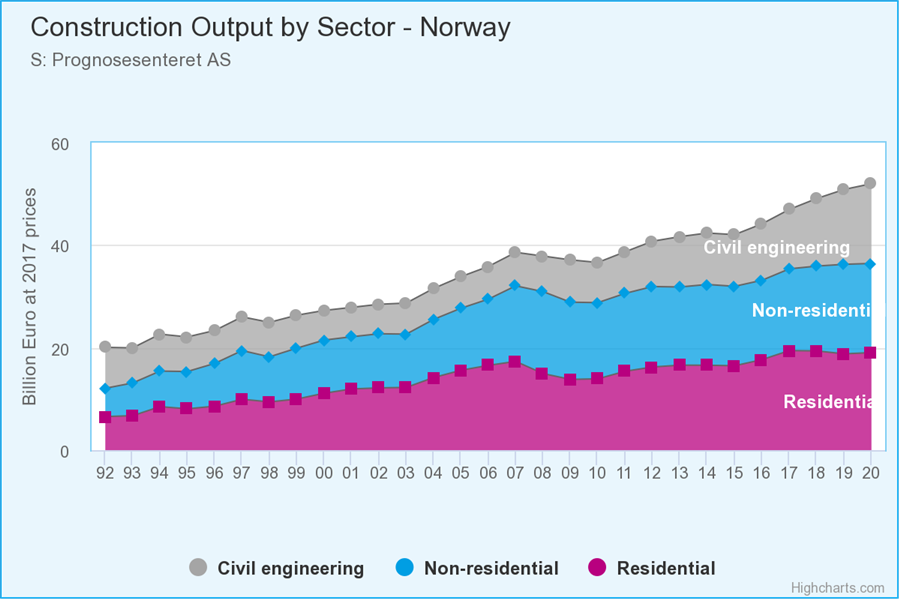 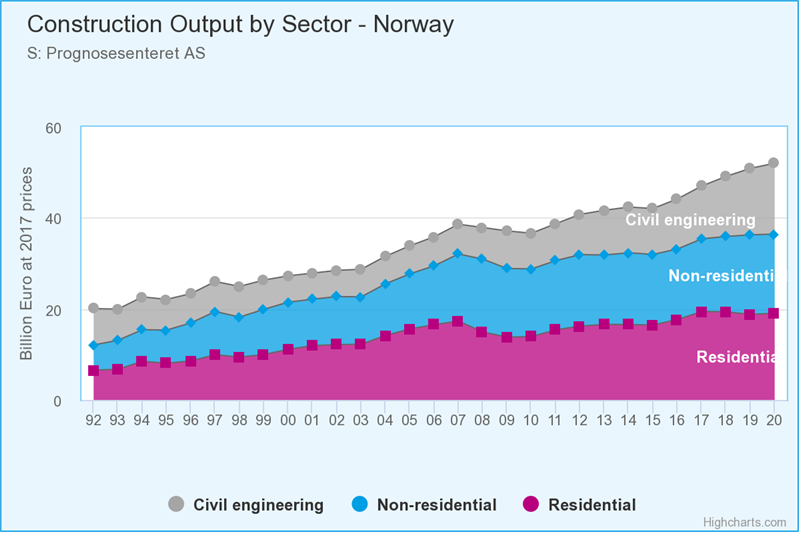 In 2018 the Norwegian share of the construction sector on GDP was around 14 % –  the second highest level in Europe, just beaten by Finland that had extraordinary figures in 2018 which lead to a 15 % construction share.  In order to obtain a fairer comparison with Finland, it may be more appropriate to adjust Norwegian GDP for the oil/gas sector and include only the mainland economy. In that case, we find that the construction part accounted for even 16% of the Norwegian economy! 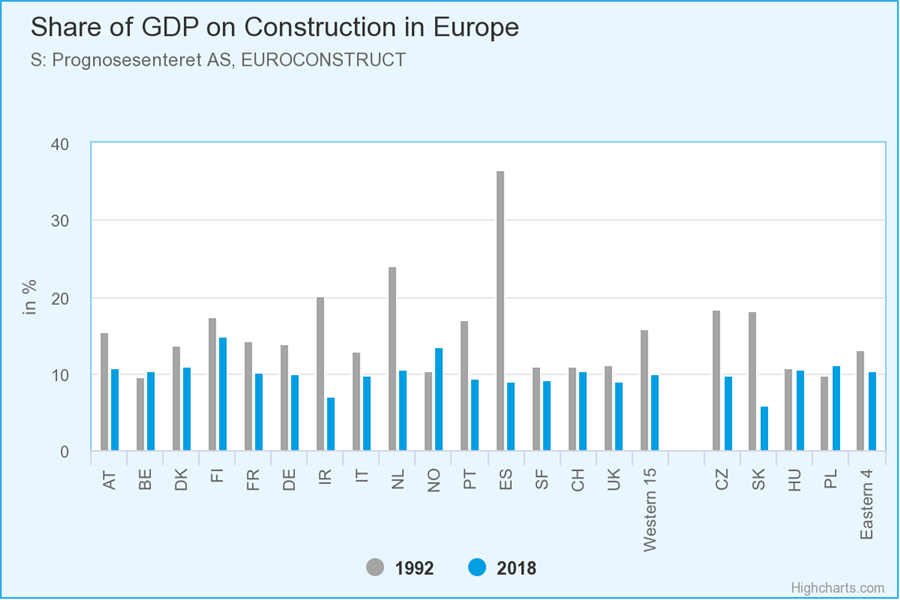 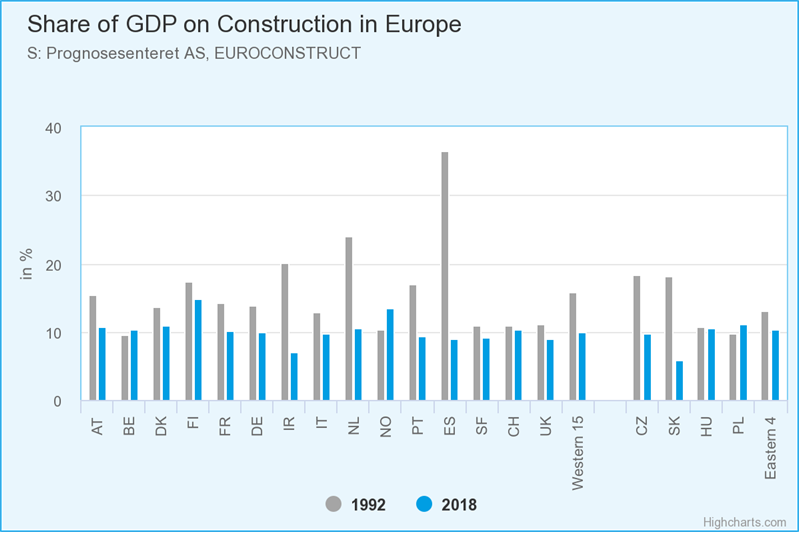 Back in 1992, Norway's construction sector valued around 4.700 Euro/capita which placed Norway as number 4. During the next 25 years, we could observe a continuous growth to approximately 8,900 Euro/capita – of course, an all-time high record in Europe(?). Number 2 in the list is Switzerland with 7,500, followed by Finland with 6,200 Euro/capita. On the lower end of the list, we find Slovakia with 960 and Poland and Hungary with 1,400 Euro/capita each.

Bottom line is that the Norwegian construction sector has experienced an extraordinary development the past 25 years – and still is in a unique booming situation. We expect this growth trend to continue at least for the next 3 years – mainly because of the high project portfolio in civil engineering which is already financed.

The long-term booming situation in Norway is of course closely linked to a very robust and positive oil-driven economy. This significantly based on both direct investments from the industry itself and the successful management and use of the Government Pension Fund Global. A maximum of 3% of the “Oil fund's” value can be used for the annual State Budget. This level was recently lowered from previously 4 %. The reason for this reduction was that the fund struggled with achieving the needed high annual return. In 2018, the petroleum revenue spending in the State Budget was agreed to 2.7% of the fund, which was a decline from 2017 when spending comprised 3% of the Fund’s capital. In 2019, it is budgeted at 2.7% as well.

The average share of oil/gas investments on GDP amounted between 5 % and 7 % from 1992 to 2018 with peaks in 1998 and 2013. Norway has become dependent on petroleum. Interest rate expectations and exchange rates follow oil prices fluctuations closely. This was clearly visible when oil prices and investments fell in 2014, and the Central Bank opposed this by cutting interest rates, which again weakened the NOK. Today's (May 19) level is close to $70 again – which probably will make room for the Central bank to raise the interest rate once more in June 2019. The downturn in oil investments from 2014 had a direct impact on the overall economy which leads to the more expansive use of public investments (from the «Fund» mentioned above) – especially in infrastructure projects. These stimulus packages are still pushing the record high investments in both public buildings and the civil engineering sector.

Increased public spending kept the oil price-driven recession under control. While Statistics Norway forecast that the level of public investments will continue to increase, the growth rate will decline considerably. An ageing population, however, means that increasing the stock of hospitals and nursing homes has become a priority, with several large hospital projects planned in the forecast period. The need for new education buildings is much less precarious.

The civil engineering market takes care of growth in Norwegian construction sec the coming years. While building production shows signs of stagnation, production of civil engineering works may increase by about 16 % in 2019 and will continue to grow also the years thereafter. We base these forecasts mainly on project information.  Investments and maintenance of new roads and railways, including metros, are main growth drivers. According to our project database, civil engineering works on new railway and metro projects will increase by 50% in 2019, 2020 and probably at almost the same rate also in 2021. Maintenance will grow at a far slower rate. Measured in monetary units, civil engineering works in the railway and metro sectors will increase more than the equivalent increase in road construction, even if road works are a much bigger sector than railway works. Growth rates will nevertheless be significant, also in road construction.

The primary reason for the latest increase in investments in transport infrastructure is to achieve political goals on improving transport facilities to reduce transportation cost, and to lift more transport from private to public transportation agents. The quality of the Norwegian roads and railway systems is at present far behind what you find in most other European countries. For many years, the difference increased instead of diminished. This became more and more a political issue, and this is the main reason for the present boom in the civil engineering sector. Political goals have also affected the increase in energy investments. Investments are all in renewable plants and power lines, and part of the goal plan of making Europe "green". Investment costs are partly subsidised by the Government. These subsidies are now phasing out, and investments in energy facilities may start to fall from 2020 onwards.

Despite all-time high levels in 2018 – the overall construction sector is expected to beat this record each of the coming years. The main reason for this expectation is that record high public spending – especially on infrastructure projects – is expected to continue.

In conclusion, the booming years in the Norwegian construction sector will continue – at least for another 3 years.

(Prognosesenteret will be present at the 87th Euroconstruct Conference in Rome on the 13th and 14th of June. For more information, please visit Euroconstruct's conference page)